Experience the luxury of our fine Alpaca knitwear designed in Australia made in Peru.

Sign up to be first to hear about sales, new product launches, and Sol Alpaca news.

The Vicuña’s extremely fine fibre, which for thousands of years has been so highly regarded by the Andean cultures, was used exclusively to dress the royalty.

The legend of bewitching eyes and a divine golden cloak

Traveling over the Peruvian puna at the very foot of the snowy peaks, and seeing the exotic golden-furred Vicuñas running wild, it is not hard to give credence to the story told by local herdsmen, which they say they heard from their grandparents, and which tells of the origin of the Vicuñas.

A very, very long time ago, when the world was just beginning, Wiracocha, creator of the universe, was discontented to see that the “runas”, his mortal sons and daughters and his favorite creation, did not make use of the things he had put on the earth. They did not know how to plough, and they clothed themselves with rough skins. They knew only how to hunt and gather and had no wish to learn anything new. Displeased, Wiracocha decided to punish them. Learning of this, a young “auki”, an immortal being, went to him and said ‘Father Wiracocha, creator of the universe, these are your creatures; before you send down your wrath on them, let me go to “Kay Pacha”, the world of men, and teach them how to make use of the wonders you have provided for their happiness.’ Wiracocha, acknowledging the wisdom of the young auki’s words, replied ‘Go, then, and teach them. When you have finished your task, you must return to “Hanan Pacha”, the world of the gods, and you shall not forget that this is your place.’

So the young auki went down and busied himself with the task of teaching the runas. They quickly learned to till the soil, they sowed potatoes and maize, and they grew lucumas and sweetsops. They learned to spin yarns and clothed themselves with attractive and colorful garments, and their lives improved. Thus time went by, and the moment came for the auki to return to Hanan Pacha. Before leaving, he wished to inspect his work just one last time, so he went to the fields – and there he saw a young lady.

The girl, slim and with large almond eyes, turned around slowly and looked at the divine young auki. Entranced, he approached the beautiful damsel who smiled and touched him gently and felt a new and immense sensation of wellbeing. Soon she conceived two babies, a boy and a girl….and the auki forgot about returning to Hanan Pacha.

Wiracocha then knew he had been disobeyed and commanded that a great rain be sent down upon the earth to destroy everything he had made. Then some of the older aukis came to him and said ‘Lord Wiracocha, do not destroy that which your son and men have made. Punish only him who forgot his promise and let the rest give you thanks each day of their lives.’

Wiracocha decided to take this advice and awaited the birth of the children that were the fruit of this disobedience. Time passed, and the auki lived without a thought of any chastisement. Then came the day. Wiracocha had intended to mete out a great punishment, but when he beheld the beauty of the newly-born children, he saw in them something special, which did not deserve destruction; and it occurred to him that he would turn the auki and his young lady into mountains, and the children into a new kind of being which would perpetuate the gracefulness and bewitching eyes of the mother and the golden brilliance of the father’s heavenly origins. Thus created Wiracocha the Vicuñas, and he let them be free for ever. 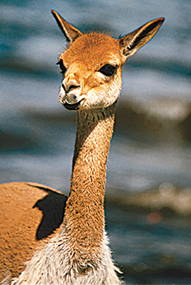 Vicuña: a beautiful and graceful creature

The Vicuña is the smallest of the South American camelids and is one of the two species which are wild; the other is the Guanaco. It has a complex social structure and inhabits the Andean steppes at altitudes of over 4,000 meters (13,100 feet) above sea level. Of delicate and fragile appearance, the Vicuña is reddish-gold in color and has a patch of longer creamy-white fur on the chest. It can be seen roaming free, graceful and elegant, bathed in the warm Andean sunlight – quite an esthetic pleasure, as this is a creature of truly beautiful proportions. It is therefore easy to understand why the pre-Hispanic cultures considered it a sacred animal, which was never sacrificed to use its fiber. Rather, it was sheared and set free once more in the celebration of the Chaccu, a centuries-old ceremony of capturing and shearing which even today is carried out by the rural people of the Andes.

The Vicuña’s extremely fine fiber, which for thousands of years has been so highly regarded by the Andean cultures, was used exclusively to clothe royalty. In the sixteenth century, when the Spaniards arrived in Tahuantinsuyo, as the Inca Empire was called, there were more than two million Vicuñas in existence. They were the object of great veneration and were very well protected since the Inca emperor, child of the Sun, dressed only with the most elaborate garments of Vicuña, and he would use them only once.

Unfortunately, the Spanish crown’s lack of foresight regarding the usefulness of the South American camelids, and the indiscriminate introduction of new species which brought diseases and damaged large areas of pastureland, proved disastrous to the populations of these most valuable animals. In the case of the Vicuña, the situation was further worsened by substituting the Chaccu with the absurd method of hunting the animals for their fibre, thus leading to their near extinction. Only as recently as the middle of the 1960s was a process started to save this beautiful species and, after very considerable efforts, this was fortunately achieved during the 1990s.

By our good fortune, the Vicuña still exists today and runs freely across the steppes of the Andes. Eighty percent of the world’s Vicuña population lives in Peru within large nature reserves, where the strictest regulations are applied for its protection and where the Andean communities take great care of it. Its extremely fine fibre, which has extraordinary textile attributes, is once more greatly appreciated in the world of high fashion. 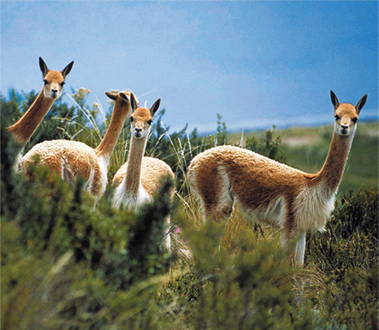 The employment of Vicuña fibre in the manufacture of garments, always for the use of the ruling classes, dates from pre-Inca times. The animal was never killed, but was captured, sheared and then set free – because the Andean man never felt he was the owner of the Vicuña, and regarded it as a divine gift whose fleece alone might be used.

In order to catch and shear the Vicuñas, the ancient Andean civilizations developed an exceptional technique which even to this day proves to be the only effective one. It is the Chaccu, and consists of an enormous, well-organized human chain which, while producing noises with different instruments, waving flags of different colors and uttering the cry ‘chaccu’, closes in around the herds of Vicuñas to encircle the animals completely. The Vicuñas are sheared in a complex thanksgiving ritual that is full of the mysticism, color and magic which such a precious gift from the gods deserves. The animals are then set free again, without having suffered any harm whatsoever, thus wining another battle in the war against the poachers who brought the species to the brink of extinction. 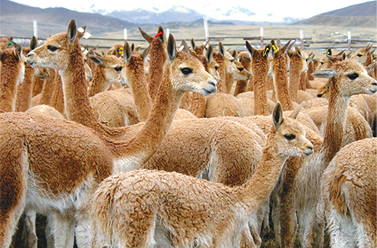 Once in possession of this most valuable treasure, the fleece of the Vicuña, the rural people proceed to remove the coarse guard hairs which grow naturally among the soft fur. This will then be carefully washed in lukewarm water and put out to dry, without using forced ventilation systems. All this is done manually, making use of delicate and extremely ancient techniques passed down for thousands of years from generation to generation and which are still, fortunately, known by many women in particular Andean communities.

All this could be carried out mechanically, but at Michell & Co. the decision has been taken to use only hand labor as far as possible, in order to keep this invaluable inheritance alive as well as to preserve the extraordinary qualities of the fibre. Once this delicate operation has been completed, the Vicuña is ready to be subjected to the truly industrial, high-technology stage of processing and thus become transformed into exquisite garments which, without any doubt, will provide the most sophisticated natural comfort. 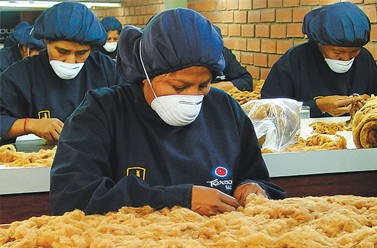 A BLEND OF ART AND TECHNOLOGY

The textile processing of Vicuña fibre is almost like the creation of a work of art from precious raw materials, and those who participate in each of the different operations must have great manual dexterity and keen senses.

The first part of the production process, which starts with capturing, shearing, and setting the animal free, followed by de-hairing, transporting, washing and drying the fleece, is carried out by expert hands. The relevant inherited skills, which date back thousands of years, fortunately still survive owing to a complex cultural phenomenon which occurs only in the Peruvian Andes, and to whose preservation Michell & Co. wishes to contribute.

By contrast, the second stage of the process, balancing the two worlds, uses the most sophisticated technology available to the textile industry in order to process this exceptionally fine and relatively short fibre. After spinning a delicate yarn of optimum characteristics, weaving, and carrying out a delicate finishing process, beautiful accessories or a luxurious cloth are obtained, an exceptional raw material with which the world’s best designers and outfitters will be able to express their art.